I was informed by our Editor yesterday  that Brian Langdon had died.

I spoke to John Chiswell and he informed me that Brian’s funeral was a few weeks ago.

Our condolences to Brian’s family.

Dorothy and I, were saddened to hear this morning of the sad news of the passing of Joyce Mihulka, wife of Jim Mihulka.

Joyce Mihulka, will be known by all in the Begonia world, as one of the Best Begonias that has graced the Show benches, both North and South of the border.

A beautiful begonia, named after a Beautiful Lady.

Our condolences to Jim and family.

On behalf of the National Begonia Society.

Hi just had a phone call from Bert Nelson to let me know Joyce the wife of Jim Mihulka has died. I know many of our members will know Jim and the beautiful begonia Joyce Mihulka named after Joyce. The funeral will be at the Crematorium at Melrose, Northumberland on the 11h January at 16-00 hrs.

The whole of the National Begonia Society offer Jim and family our condolences. Our sympathies go out to all the family members.

I was saddened to hear that one of our Life Members’ has past away.

Ken Wilks, was known for his fantastic Hanging Baskets of Isabella, that more often than not, took the Red card.

He was a regular Exhibitor at The National Shows over many years at Kings Heath Birmingham.

Ken was a lovely character, liked by all who met him.

Our condolences to his family at this sad time.

I had known Ken since the mid 80s, was a stalwart of the NBS for many years, apart from being an exhibitor, committee member,  was for many years responsible along with John Dearn for the storage , erection and maintenance of the bloom boards, which in the early days required fixing together using screws and then given a coat of paint, a mammoth task. Ken was a true gentlemen, always a smile on his face and willing to give assistance, he will be sadly missed by all who new him.

On Thursday 11 March 2021 Bill Dodds the SBS Honorary President has died. He was a former British Champion and raised Isobel Keenan, Kirsty Wade, Margaret Eveleigh amongst others. He leaves behind wife Rose and family, condolences from all the within the National Begonia Society.

Peter, George’s Son phoned me to say that George had passed away, aged 83.

The former Treasurer, had been a N B S, Member for many years previously.

Our condolances, to George’s sons and family, during this sad time for them.

On behalf of The National Begonia Society.

It was with great sadness, that I received the news from Brian’s two sons’, on Boxing day, that Brian Simmons had passed away, in hospital on Christmas Eve.

Brian , a Life Member and was the former Web Manager, of the National Begonia Society Web Site for decades, prior to his retirement, from that role in 2018.

To begin, he exhibited at local Horticultural Shows in Portsmouth/ Portchester Area.

Later, Brian and Dave, accompanied by their wives, Christene and Pauline and with a loyal      N B S ,Membership, organised and exhibited at the South Coast Area  Portchester Show, in a local Church Hall,which became a yearly event for many years.

Dorothy and I, first met  Brian and his wife Christene, whilst we attended the Portchester Area Show in 2007.

Both Brian and Christine welcomed us with Open arms.

That warm friendship will forever, be in our memories.

Our condolances are extended to Christene, John, Peter and Grandchildren.

It is with sadness, that Ron Aldous has passed on. 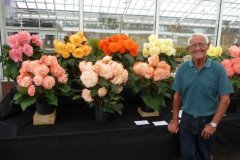 Ron, until only a few years ago, was one of the Best Growers’ in Double Tuberous Pot Plants, winning several National Begonia Society, British, Seven Pot Championship Classes, at our National Shows.

He won many other Pot Plant Classes too, often winning Best Exhibit in Show.

He also, was a regular exhibitor at Southport Flower Show,winning The Six Pot, Double Tuberous, Classes on numerous occasions over many years.

His presence, will be truly missed, by those who knew him.

He will never be forgotten by those who knew him.

Our Condolences, are sent to Ron’s Family. 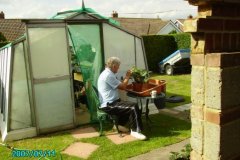 It was with sadness, that I heard that a former Member had passed away.

Roy Sear’s Nephew Stephen, informed Steve Jones, who passed the news onto me.

Roy was fondly known as the Soft Southerner. Roy often, wrote numerous articles, for the bulletin.

He was from the South Coast Area, and each year he exhibited at the Porchester Show. That’s where I first met Roy. He was a kind hearted man and his enthusiasm for growing begonias was infectious.

He would often telephone me seeking advice.

He hadn’t enjoyed good health for some years, having major surgery a few times, however, he was determined to continue life as normal and continued growing and exhibiting his beloved begonias.

My sincere condolences, were given to Stephen Roy’s Nephew and he said he’d pass the message onto his family.

It is with sadness the I heard of the death of Elsie Catterall, The Widow of Dr Eric Catterall.
I knew for some years that she was still alive and living in a Care Home. For her loyal service to the NBS, at the side of her husband, she was awarded Life Membership.
It was only a week ago that Colin Nicklin emailed me saying that Richard their son had found, a few N B S, Cups, which had been misplaced for some years, in the attic of their home, when he was clearing the attic .
That’s when my thoughts were recalled of how such a major figure Erick Catterall was in the History of the N B S.
He wrote a book on Begonias, which is still in circulation today word wide. The book is among my collection of Begonia books on my shelf, which I often refer to on cold Winter nights.
Another sad loss, of a past Member, was the loss of Dennis Sweeney, aged 92,from North Wales. He was a regular exhibitor at Southport, winning the Six Pot Class on numerous times.
I met Dennis and his wife several times at Southport. Both were lovely people and helped on the Area Stand.
A few years ago, Dennis tel, me asking if I had any Flamboyant for sale. Needless to say, there was a package in the post to a loyal Member, by return of post.
It is sad to hear that other older Members’ which have been a big part of our history have past on.
Our thoughts are with the families at this sad time.

Shows taking place this year get involved many classes from Novice to Champions .

Views This Year : 18465
By continuing to browse the site you are agreeing to our use of cookies.