I visited Blackmore and Langdon on Tuesday, 5th., October, 2021.

What a lovely warm welcome, Dorothy and I received.

I was amazed, on how many cutting tubers Nick Langdon had taken this year.

The benches were awash with thousands of begonias, grown-on in stages, into two litre pots. More pots, than I’ve ever seen at any one time at B & L.

It was an amazing sight, knowing, the hard work and effort that had been put in throughout the year, prior to reaching this stage.

They were amazing,  healthy, strong plants.

He begins taking cuttings early March, through to the end of August / beginning of September.

I know many orders have been taken already for next season, particularly for the rarer sought after varieties which previously weren’t available.

My advice, would be to enquire early,  to avoid disappointment- the early bird catches the worm. Ian Williams

Seed sown earlier in the year are left to flower.

From these there may be a few selected to grow on, if they show promise.

These are the pots which were destined for Hampton Court.

Above and below showing the same photo, but taken from other end. These are for Hampton Court

A picture of health. plants destined for Chelsea, which have been timed later this year, as Show date has been delayed.

B & L, have extended their sale, as they still have a limited number of quality named Begonias at reduced prices, including some of the sought after varieties.

These begonia plants have been potted up into four litre pots.

They are a picture  of health, with clean, healthy green leaves and sturdy thick stems.

They haven’t received any supplementary feeding yet, only watered when required.

There’s sufficient feed/nutrients in the compost.

If you wish you can visit Blackmore & Langdon to view

If you’re looking for a bargain and want to buy a few begonias at reduced prices,

there’s a begonia plant sale on too, during the month of May.

Begonias will be at sale prices, throughout May.

Please introduce yourselves as N B S., Members’.

A very warm welcome extended to all.

Begonias can be bought at sale prices by those who attend B & L., personally.

Other bedding plants are also for sale.

Notice the spacings between plants, giving adequate room for healthy plant development, air circulation- which is a must,  with plenty of all-round room to work on and care for plants.

Notice the growth and plant development since the last photo was taken, four weeks ago.

A single cane, slanted slightly backwards, is placed behind and stem tied in.

Good sturdy stems with dark green healthy leaves, indicating that the begonias are happy with the growing, light conditions and general care.

A lot of care and attention is given to these plants at this stage, with the emphasis on cleanliness and no damage to leaves or stems.

Photos of their development will be seen in a month or so when buds/flowers develop.

This potting machine has recently been bought in from Holland.

At the beginning of the conveyor a hopper holds approx., four/five 80 lts bags of compost.

Pots are automatically placed on a round table, which rotates, filled with compost and a large drill type tool makes a receiving hole in the compost, into which a plant is placed in manually. Different size tools are used, depending on receiving hole size needed.

The pots are then sent down the conveyor, loaded into trays which are then transferred onto flood benches for growing on.

Two people are able to complete 120 pots, from start to finish in fifteen

Progression at B & L.

As you can see from the latest photos, the majority of last years cutting tubers of named Double Tuberous Begonias, have been potted up into 2 Lt., pots, amounting to thousands.

They are mostly, single stemmed, with the majority of basal cuttings removed as cuttings.

As you can see, those selected for Chelsea have been timed for later in September, as this year the Chelsea Show date is much later.

Those on the left and right are spaced out giving plenty of light for all round development of plants.

Both sides, are grown for different Shows over the Summer months.

B & L, grow their Begonias as a one -up, single stem for exhibition.

A view of the left handside of the those pots destined for the Summer Shows.

Notice the grided staging with pots spaced adequately, staged for easier maintenance,  such as tieing , feeding and bud selection etc..

This allows maximum air circulation, which is a must for healthy plant development.

The cutting tubers are ready for dispatch.

Safely packed in poly packs ready to send out, in pots, ready for customers’ to pot-up on arrival.

Many growers’ chose this method, of ordering and receiving their begonias from B & L., as they do not need to heat their glasshouses and be afraid of late frosts.

Sealed and packed ready for the final stage, before sending.

Plants packed securely in box, addressed to customer, collected by Royal Mail Courier from B & L., Nursery,  ready for delivery, the very next day.

Can’t get a better service.

The started cutting tubers, will soon be ready to send out.
This year, there have been reports
that many growers’, have lost quite a number of tubers, thus , both Simon and Nich, have been busy taking orders and preparing to send the started cutting tubers out very soon.
Many growers’ choose, to order started cutting tubers, as it saves them the cost of heating over winter and they know, that their begonias will be off to a good start.
Mature tubers.
B & L, have sold the majority of their tubers earmarked, for sale for this year. They still have a few left. To see what is still available, please look on their Web page.
A tip.
The sought after mature tubers that you may have asked for, may not have been available however , there may very well be a started cutting available of that variety.
If you don’t ask, someone else may have.
They have already, taken countless cuttings, in readiness, for producing next year’s tubers. The continuous production line for producing tubers is well under way.

The next phase of Blackmore & Langdon’s Season Feb 22nd.

Thousands, of the smaller cutting’s tubers have been pipping and throwing cuttings as you can see.

Some of the larger tubers too, have been potted up.

This is only a small section showing some of the benches, filled with potted-up begonias.

The start of early basal cuttings have also been taken. They start early at B & L.

Blackmore and Langdon, supply quality Double Tuberous Begonias to The U S A.

Nicholas Langdon, informed me that he’s been sorting out orders [08/02/21] and within the next week or two, will be packing individual orders, to America.

He is still taking orders, however, must wait for U K,  D E F R A,  to inspect before exporting.

Good to see Begonia enthusiasts from The U S A, can receive quality tubers from the best Begonia Nursery Worldwide.

The New Season at Blackmore and Langdon is well under way.

A few pictures of the propagation house heat mats!! 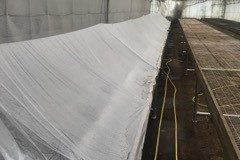 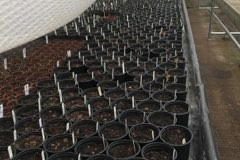 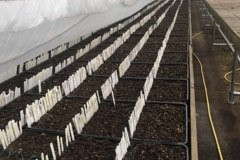 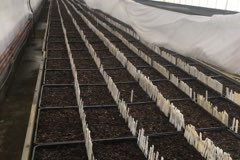 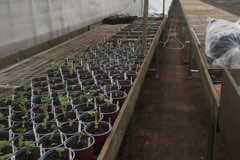 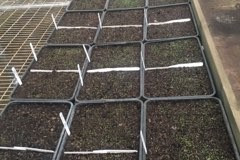 The Cutting Tubers, plus, the Tubers for the display Pots, for B & L, Display stands, at the early Horticultural Shows have been started early.

Nick Langdon uses Heat Blankets, on which he starts his larger Cutting Tubers in pots, as you can see.

The smaller cutting tubers are started in standard seed trays- filled level to the top and depending on size, the smaller- large Hazel Nut size, up to thirty-six can be started.

From the photos, you can see that the propagation hot beds, are draped, with Horticultural fleece, particularly, during colder periods. However, during brighter days, are removed to allow fresh air to circulate.

Begonias destined for white flower farm in the USA!!! Just packed up today!!!

You will notice in a photo, there are two large Tea Chest sized containers. These are destined for the American Market, to White Flower Farm. 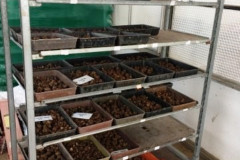 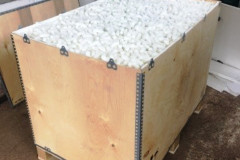 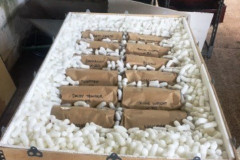 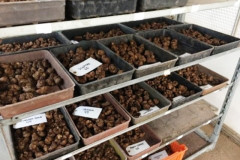 The containers can hold a few thousand tubers.

All tubers exported overseas, must be individually checked by D E F R A, Inspectors’, prior to an Export Certificate being issued.

The services of the Inspectors’ cost a small fortune.

Also, the amount of time spent completing the paperwork for Export, is exceptionally time consuming, amounting to many days of ‘Man hours ‘.

The sale of Tubers.

B & L has a wide selection of named Cascading/ Pendula tubers for sale.

A few of the hard to acquire varieties, may not be advertised in the B & L, Catalogue, or their Web page, as stocks of these sought-after varieties are being ‘built up’. However, if you don’t ask, you don’t get.

Back to Home Page

Shows taking place this year get involved many classes from Novice to Champions .

Views This Year : 22434
By continuing to browse the site you are agreeing to our use of cookies.